Whilst on the road to recovery, my newly acquired hound was very weak. During 5 days of hospitalisation, the gastrointestinal disease, Parvovirus, ravaged her insides and the only nourishment was a drip feed.  Constant vomiting and diarrhoea had taken their toll and she was in a pathetic state. My appearance at the vets gave her the will to begin eating again, but her throat and stomach must still be tender so rich dog food definitely not wanted. Chicken and rice was the new menu and for the first few days she still only ate from my fingertips. Her weakness was apparent when the Jack Russell appeared. They always play fought and pretended to attack each other but this time she just flopped on the ground and halfheartedly bared her teeth. Though she summoned up strength to bark when she thought he was eating her food!

Day by day, Lapi’s toileting walks got longer and I did as the vet advised and safely disposed of her infectious poo. For this reason I kept her leashed, as I noticed she often expelled 2 or 3 times during the ramble. At first she didn’t mind. Happy to follow scents and most of the time I let her choose the route, which mainly stayed along the well-trodden path. But occasionally veering off into the trees, causing me to duck branches that were deer height, and dodge thorny brambles, making me feel like Indiana Jones!

Going off the beaten track delivered a magical moment, as one day, I followed a ground sniffing dog through the wood and heard a curious noise. Many strange sounds happen in this bio diverse mountain range but I couldn’t imagine the creature making this one. Was it a bird or a mammal? It was coming from above, higher up the slope, at the base of a tree. As I approached quietly, I couldn’t believe my eyes… 2 hedgehogs busying themselves, obviously preparing a nest, chatting away to each other and completely oblivious to me. Until Lapi spotted them and barked! I was so glad she was leashed and the hedgehogs froze while I willed her away.

After a few days, her strength began to return and seeing the little Jack Russell catch sight of something, and run off yapping, was too tantalising. She pulled at the leash and barked, looking back at me as if to say, ‘Why can’t I go?’ I felt terrible but she was still weak and I knew she would over exert herself. Plus there was another reason. Hunting season was closed as it was birthing time for the deer and boar, and as she was a hunter, I was being a responsible dog owner.

In perfect timing, the weather became hot and heavy; humidity keeping Lapi slow and tiring her quickly. Which was good news for me, as even though I’d been walking over 6 miles every day for 2 months, of steep mountainsides weren’t seeming any easier. I decided to vary the walk and took the 2 dogs on a different path. They loved the new bushes to sniff or ‘doggy facebook’ as my friend calls it. As a longer route and more tiring for the dogs in the heat, I left it until the end of the day, but the second time I left it a bit late and dusk was closer than I realised.

The route left the road and descended down through the trees. As we made our way along, suddenly sounds of large animals below us could be heard. Immediately the Jack Russell went bombing down the slope and Lapi was straining to join him; yelping and whining her frustration. I could see dark forms of huge boar, moving in the undergrowth, and from the amount of kafuffle, realised there were several. Concerned for the little dog, I called his name and when his yapping stopped I worried even more. As the light was starting to go, I considered it best to keep moving but kept vocalising so the boar stayed away from me. With a frantic Lapi on a tight rein, walking on the narrow path became rather tricky, but I ventured onward, shouting for Bobche.

Then, in front of me, I saw a small creature running straight towards me. I stood still. ‘It’s the Jack Russell’, I thought but as it got closer I realised the stripy markings were actually a little piglet. It saw me and did a quick 180 to run back the other way. Lapi was beside herself and a good job she’s not bigger or I wouldn’t have been able to hang on. Suddenly, Bobche appeared from behind me and raced past to chase the piglet. More worries now that mummy boar must be nearby, and she would not take kindly to a dog, even though he was the same size as her baby! Female boar are known to be very aggressive when protecting their offspring so I was glad I had a defence weapon beside me. I pressed on, shouting for Bobche, hoping that would keep all the boar at a safe distance and bring the Jack Russell back too.

Thankfully, Bobche turned up, panting heavily and tongue almost on the floor. We made it to the road before dark and without any more challenges. Another mountain adventure!

The following week, thunder storms cleared the air and heavy rains put us back on the shorter walks. Lapi livened up with cooler temperatures and sometimes I let her ‘pull’ me along to burn off extra energy and help me ascend the mountain paths. She always walks much further anyway, by criss-crossing paths, doubling back and around, following  scents of both wild and domestic animals. These often deviate up inclines too steep or into undergrowth too low for me, but she understands when I say “Ah”, in a short and sharp manner. Without a fuss, she gives up and finds another smell to track.

The vegetation has now shot up making off-path walking more difficult, but has brought out wild mushrooms, colourful meadow flowers with wonderful smelling wild thyme, and spectacular rainbows. Tender Loving Care has good rewards for both the patient and the carer 🙂 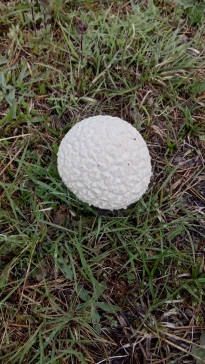 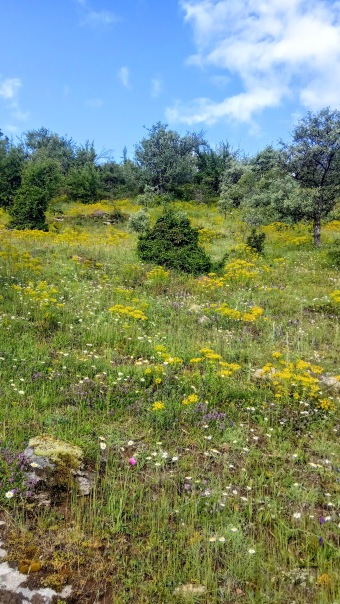